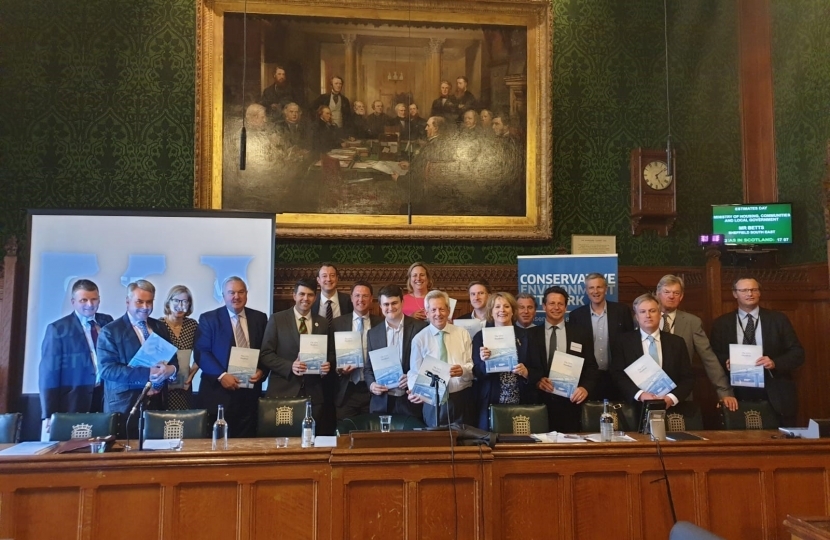 MPs from the Conservative Environment Network (CEN) Caucus have today welcomed the Environment Secretary Michael Gove's speech at Kew Gardens outlining his vision for future action on ocean conservation, action to tackle air quality, and leadership on climate change both at home and abroad.

Sam Richards, Director of CEN said: "Today’s speech by the Environment Secretary sets out the scale of the challenge we face and the ambition needed to meet that challenge. From new legal limits on our toxic air to global leadership on climate change the breadth and depth of today’s speech builds on the excellent work he has done so far at Defra - and of course on the ideas set out in the CEN Manifesto. I hope that the next Government will take this as a blueprint for future environmental policy in order to ensure that we restore our countryside and protect our planet for future generations."

The speech touched on the political, economic and moral need to act to tackle climate change, as the Environment Secretary acknowledged that 'time is running out to make the difference we need'. The speech comes barely a month after the UK adopted a net zero emissions target by 2050.

Simon Clarke, MP for Middlesbrough South and East Cleveland, who led the campaign from Parliament for net zero said: "Climate change is the biggest threat we face, and we have a duty to future generations to address it. Net zero was the first part of that important commitment, to end our contribution to climate change altogether by 2050. The Environment Secretary is absolutely right that we must unite globally to solve this issue, we cannot do it alone. And we cannot miss the vital opportunity of the UN Climate Summit COP26 next year. As one of the host countries the UK has an important role to lead global action."

Sarah Newton, MP for Truro and Falmouth, who recently introduced a Bill to improve home insulation and energy efficiency welcomed the acknowledgement of the importance of greater action at home in the UK, as well as international leadership on climate change. She commented: "the net zero target was an amazing commitment, but we know that we need to do more to get there. The Committee on Climate Change only recently highlighted several policy gaps and outstanding questions, which the recently published CEN Manifesto aimed to answer. We have pledged to introduce a world leading Environment Bill - and it's great to hear more detail from the Environment Secretary on that today, reaffirming his commitment to it. This should send a strong signal to both leadership candidates that the future Prime Minister must make tackling climate change, and other environmental challenges, a priority."

The Environment Secretary outlined how the Environment Bill, the first in 20 years, would 'set a trajectory for environmental improvement for decades to come'. This includes greater measures to tackle air pollution, following on from the Government's Clean Air Strategy, by pledging to include World Health Organisation (WHO) targets for air quality in the upcoming Environment Bill.

The Environment Secretary also highlighted the significance of conservation goals alongside climate action, including the importance of protecting the world's oceans.

Richard Benyon, MP for Newbury, a lead campaigner for the expansion of the Blue Belt programme commented: "As the Environment Secretary has highlighted before, the oceans are not only vital for the marine life they support, they are also the lungs of our blue planet, and a massive carbon sink. This is why the UK has pledged to protect 30% of our oceans by 2030, and called for this ambition to be adopted globally as well. I'm delighted that we're going to be pushing for this target even further at the vital UN Ocean Summit next year. 2020 is a key year for global action on conservation and the Environment Secretary has been clear that we will continue to embrace our responsibility as a world leader."