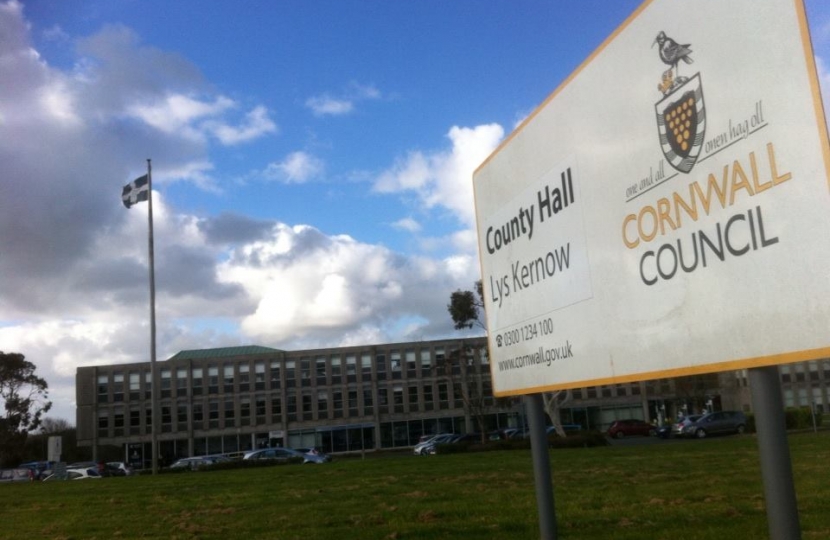 This follows the Conservative Group becoming the first ever political group with overall control of the council since its formation in 2009.

Cllr Taylor will also be the first female Leader of Cornwall Council.

The Cabinet will be made up of the following Conservative Cornwall Councillors.

Linda is a retired Bank Manager with 28 years experience of retail banking, which including farming and small Businesses. She has also previously been Mayor of St Ives for three consecutive years. Linda has been a Cornwall Councillor since 2017, and has led the Conservative Group since 2018,

David has been a Councillor for four years, for the last two years he has chaired the Audit Committee and "shadowed" the Finance portfolio. David's business career involved him in advising on many different companies and individuals from around the world in areas such as legal, taxation, mergers and acquisitions, corporate governance etc and he brings a wealth of his experience to this new role.

Dr Andy Virr brings 25 years’ experience of working on the frontline in the NHS as an A&E Doctor to the role of leading Social Care in Cornwall. Health and Social care need to work together seamlessly in order to deliver the best care for patients and residents. With one foot in the NHS and the other in Social Care, Andy will embody the need for integration of services.

Martyn was born and brought up in Falmouth and had a successful career in the Administration Branch of the Royal Air Force, retiring as a Squadron Leader in 2004.

He has been a Parish Councillor since 2004 and was first elected to Cornwall Council in 2017.  During the last Administration Martyn shadowed the Environment and Public Protection Portfolio.

Working cross-party with a Labour colleague Martyn seconded the Motion which led to Cornwall Council declaring a Climate Emergency.

In 1975 Stephen became the youngest licensee in Cornwall and ran one of the busiest venues for 14 years. He then spent 16 years rebranded and developing the St Moritz Hotel. Stephen entered politics in 2009 and was Cabinet member for The Economy & Climate Change for the final part of the first administration, He has also been a director of the Cornwall & Isles of Scilly Local Enterprise Partnership.

Olly Monk has worked as an Environmental Consultant since 2012 in the Residential and Business sector, helping homeowners and business improve the energy efficiency of their homes and reduce their environmental impact. Olly has been a Cornwall Councillor since 2012 and was the lead councillor delivering Newquay's world class skate park Newquay's Concrete Waves. Since 2018 he has been the shadow cabinet member for housing at Cornwall Council.

Philip Desmonde is a Chartered Engineer and Fellow of the Instruction of Structural Engineers. He has over 35 years experience as a multi-disciplinary civil and structural engineer providing designs and overseeing the construction of building, highway and water and environment projects up to £75M in value. He has worked throughout the UK and oversees. For 6 years he worked for the Government of Qatar, delivering a programme of Schools, Sport Facilities and Urban Infrastructure.

He provided his skills and capabilities throughout the UK and parts of Europe from the Head Office of his Consultancy practice in Truro, with a large team of professional personnel. Clients have included major organisations such as BAe Systems, the MoD, Rolls Royce and the Scottish Government.  Following his sale of his Firm he has been providing expert evidence and advice on construction disputes and development delivery.

During the last 4 years as a Cornwall Councillor, he has been Shadow Transport Portfolio Holder and Vice Chair of Audit

Barbara is a Volunteer Director of Youth Cafes Cornwall CIC, and trained as a youth worker in the 1980’s. She is passionate about giving our young people and their families the support that they need to make the most of the opportunities available to them, and to make Cornwall the best place to live and work.

Carol was born, grew up and has lived in the Parish St Minver Lowlands   all of her life. She has good grassroot knowledge of Community issues and has served as Neighbourhood Shadow Cabinet Member for the last four years. Her working life is centred around the tourism industry. She has also been a long-serving Parish Councillor and during the last 4 years also served on Customer Overview and Scrutiny, Planning and licensing committees. She is chair of the St Minver Community Hub Committee, a charity dedicated to building and running a Community hub which will incorporate space for lost local services such as a doctors practice and post office.

Richard has a background in business and local government. He has been a Cornwall Councillor for 4 years and has been the Shadow Cabinet Member for the Customers Portfolio.

As a non-executive director of Corserv, he has 3 years of experience working with Cornwall Council owned companies, including housing, construction and aerospace.

He also serves on the boards of several companies and non-profits in the UK, Europe and the US as well as being the Deputy Mayor of St Austell.

“I am delighted to present our formidable Conservative Cabinet which will run Cornwall Council for the next four years. Here we have an excellent mix of skills, experience and knowledge from a diverse and enthusiastic group of councillors, all who have serving Cornwall at their heart.”

“Our Cabinet is there to serve you, the Cornish taxpayer, and we will not let you down. We look forward to getting to work to make Cornwall Council work for you, to work with our six Cornish Conservative MPs and the Conservative Government and  to make our Cornwall a better place to live and work and grow up in.”