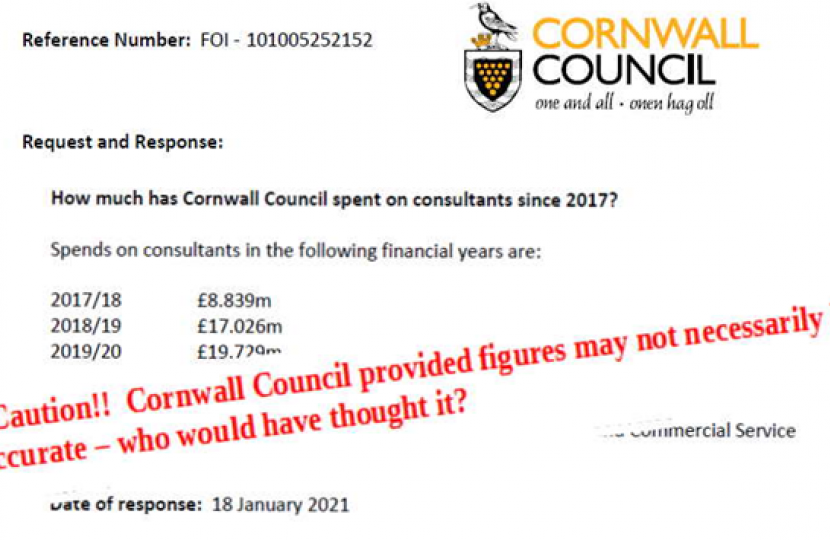 “Much comment has arisen about the level of consultants’’ fees etc paid by Cornwall Council in 2019/2020. Just to make sure that what facts we have are straight including an outright mis-statement to the Press and blatant attempts to deflect the issue I have set out below the time line since I first raised this question.”

“In summary, what is terrifying is the dismissive way a reasonable question is dealt with followed up by misinformation (at best). There is only one source for these spends and that is the taxpayers’ pockets and, as is clear from what is set out below, the taxpayer deserves a lot better than the current administration which I have described as junta before and, in this instance, has absolutely lived up to this description.

2.            Cllr Paynter said that yes he was aware of this number, undertook to provide an analysis of the number and sought to justify it on the grounds that it was better than employing permanent staff [see my earlier Press release on this attempted justification]

3.            I can only assume that Cllr Paynter had been made aware of the Freedom of Information request so as to be able to come out with his glib response-one might have thought that he would have looked further into such a large number  before giving his answer but…

4.            On January 21 the Falmouth Packet ran a story on this issue which contained the staggering statement from Cornwall Council , “ The figures[ie £20 million] quoted are completely incorrect. The actual spend for 2020/21 is projected to be £10.5 million..”  and again waffled about this money being spent on agency staff, contractors etc.

5.            My attention was drawn to the Falmouth Packet article on February 9 when I then chased for  a response to my original question at Council and at  the same time asked The Council’s Chief executive for an explanation of the statement that had been given to the Packet which contained an outright untruth, was deliberately misleading in talking about 2020/21 when I had asked about 2019/2020 and also why our Communications Team could put  something out calling into doubt the veracity of what I had said without even being bothered to talk to me.

6.            Later on February 9 ( by coincidence I am sure), I received an email from the Council’s Chief Operating Officer which suggested that the figure given in the FOI response was perhaps incorrect as, “this figure had been taken from our finance system based on the codes used for consultant spend. The amount taken off the system had not been “cleansed” to ensure it was wholly consultant spend”.

7.            On February 10 I received a further email which explained that the true spend on consultants in 2019/20 was £13 million with a very broad breakdown of this which itself contains some staggering figures. I am to this day unclear as to what the other £7 million was.

8.            Bizarrely, the email I had received from the Chief Operating Officer on February 9 contained the statement that year to date (ie 2020/2021) expenditure on consultants was £14.9 million so where on this earth, or any other, did the figure given to the Packet of £10.5 million (see para 4 above) as projected spend for the whole year come from?

9.            I have eventually received an apology for the wrong statement given to the Packet but have not seen any communication to the Packet acknowledging that a media statement put out to them contained an absolute falsehood and was very misleading.

10.          Finally, Cllr German, leader of Cornwall Council described the £20 million figure as “totally fictitious” at a recent Cabinet meeting without any further comment. I do not know whether Cllr German had just not been briefed properly by his deputy Leader and officers or whether he was seeking to brush over something very quickly.

Whether in the end the spend was £13 million or £20 million, it is still a huge number and the people of Cornwall deserve a reasonable explanation on what has happened here and just how many millions this administration has spent on consultants.”