Cornwall longlisted for City of Culture 2025 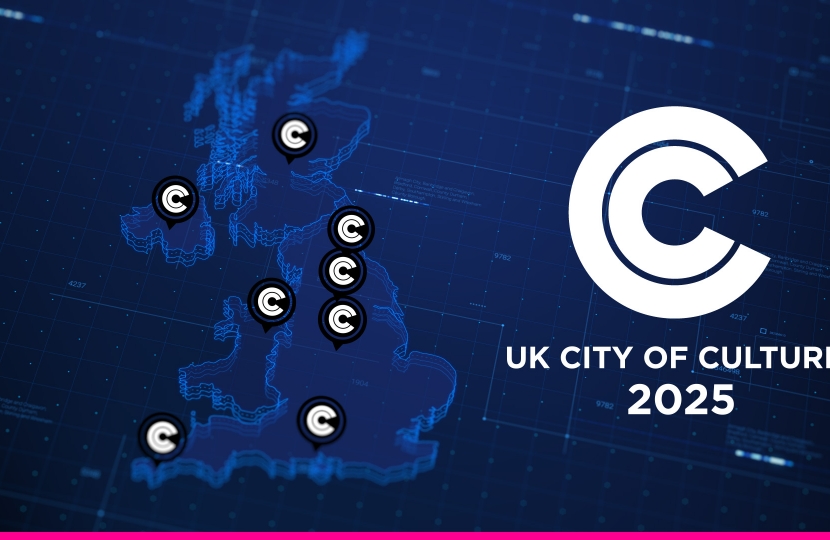 Cornwall’s bid to be the UK’s City of Culture 2025 has moved a step closer after being longlisted with seven other parts of the UK for the prestigious title.

The Department for Digital, Culture, Media and Sport (DCMS) which runs the four-yearly competition, confirmed today that Cornwall had made the longlist from an initial 20 expressions of interest from around the UK.

DCMS will now award Cornwall a grant of £40,000 to support a full application before a final shortlist is announced in early 2022, with the winner expected to be announced in May.

Announcing that Cornwall had made the longlist, Culture Secretary Nadine Dorries said:

"Culture is for everyone, regardless of their background and I'm delighted that the bids from our eight longlisted places will help areas across the UK level up by increasing access to culture. I wish all our successful bids luck in the next phase of the competition. Cornwall's bid showed huge promise and I look forward to seeing what they have in store."

“I’m delighted Cornwall has made the longlist for City of Culture 2025 - we’re now an important step closer to our goal. I’d like to thank our bid team for all their hard work in getting us to this point, and our MPs for their support throughout the process. It’s true that we’re up against some really strong competition, but as we’ve shown with the G7 and the Tour of Britain, the people of Cornwall are wonderful hosts and I’d like nothing more than to share Cornwall’s unique culture – our museums, our theatres and our thriving creative sector – with the rest of the country and the wider world as City of Culture in 2025.”

All six Cornish MPs are backing the bid, having recently sent an open letter to the Culture Secretary highlighting the positive impact City of Culture status would have.

“Cornwall has an incredibly strong and diverse culture and heritage with something for everyone. While we are renowned for our stunning coastal views and food and drink we also have world-class and vibrant creative industries.”

“I am delighted to have supported this bid, along with my Cornish MP colleagues and Cornwall Council, and look forward to seeing it progress to the next stage, with additional funding from the Government being used to help make the case for Cornwall to be the UK City of Culture for 2025.”

“With our unique Cornish culture and heritage, as well as our exciting current arts and creative offer, I am so pleased that this has been recognised and we have been shortlisted for the UK City of Culture 2025 to allow our bid to move on to the next stage. I look forward to working with all involved to develop our offer and demonstrating what everyone who lives, works here and visits already knows - that Cornwall is the creative and culture capital of the UK.”

Glenn Caplin-Grey, Chief Executive of the Cornwall and Isles of Scilly Local Enterprise Partnership, which is spearheading Cornwall’s bid, said:

“This is fantastic news and cements Cornwall’s position among the top cultural and creative regions of the UK. We’ve already shown we can stage world-class events from the G7 Summit in June to the recent Tour of Britain race, and City of Culture status would put a national and international spotlight on Cornwall’s culture and creativity for a whole year.

“Ours is very much a collaborative bid, working hand in hand with the creative sector, and we look forward to developing our proposals in the coming weeks.”

Cornwall’s bid has the backing of creative personalities and organisations across Cornwall and beyond, including actor and writer Dawn French, national Tate director Maria Balshaw, the Eden Project, Falmouth University, Hall for Cornwall, Creative England, Miracle Theatre, Cornwall Council and many more.

The longlist was recommended by an independent advisory panel which brings together a wide range of expertise from across the UK.

Cornwall’s bid has the themes of ‘people, place and planet’, with the environment and the transition to a low carbon economy and society at its heart. The bid explores how culture can foster conversations and community responses to some of the biggest challenges facing the world today, including climate change.

Bidding for the City of Culture title has been shown to have a very positive impact on a place, with previously longlisted locations bringing together enduring partnerships to share a vision for an area and attract investment.

And the benefits of winning the title are significant, showcasing a location to the country and the world in a year-long celebration of culture.

Coventry, which is UK City of Culture 2021, has attracted over £100 million in capital investment to support cultural projects, while Hull saw more than 5.3 million visits in 2017.

Cornwall has long been a crucible of artistic excellence, with a concentration of creative activity usually only found in cities.

Cornwall’s creative economy includes more than 1,000 businesses employing over 5,700 people and it boasts a fast-growing tech sector. Falmouth University specialises in creative industries and contributes some £100m to the Cornish economy every year, with courses ranging from fine art to computer gaming.

Cornwall has world-class cultural institutions, from the Tate St Ives to the Eden Project, more than 70 museums, and a range of spectacular venues from the rugged clifftop Minack Theatre to medieval amphitheatres. It is also a place with a thriving community culture fuelled by the participation of the wider community in Cornwall’s many choirs, dances, bands, festivals and sporting events.

The Commonwealth, G7 and NATO Summits