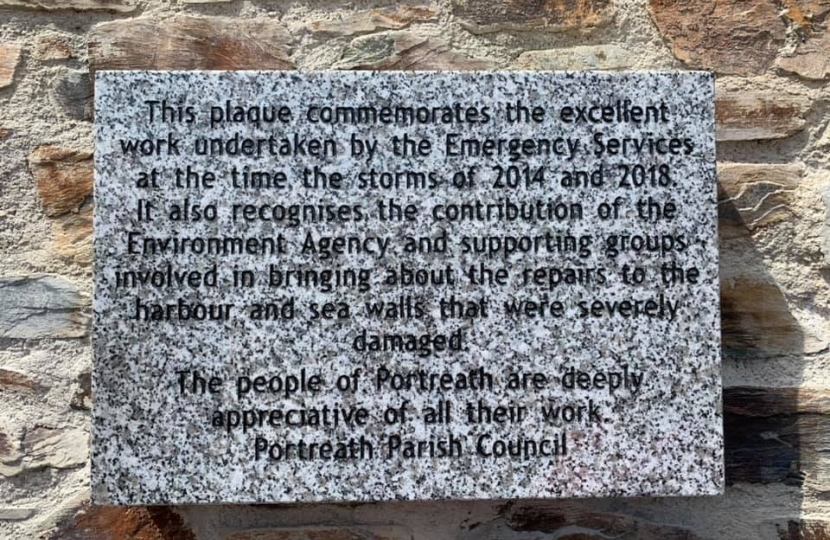 George Eustice, MP for Camborne, Redruth & Hayle recently joined members from Portreath Parish Council to unveil a plaque in commemoration of the work undertaken by the emergency services at the time of the storms in 2014 and 2018, and everyone who has been involved since to repair the wall.

The unveiling of the plaque was a great moment for the local community who were devastated by the storms. The plaque was unveiled by George and representatives from the Environment Agency, Portreath Parish Council and Cornwall Councillor Joyce Duffin, all of whom have played an active part in repairing the wall.

George said, "When Storm Emma hit Portreath the sea wall was torn apart by the ferocious weather leaving many in the area unprotected. I am glad that following this terrible event, the sea wall has now been rebuilt and that homes and businesses in the area are once more safe from the sea."

Work will now continue to discuss what more can be done to protect Portreath and the surrounding towns from the devastating effects of flooding. Across the country 13 flood schemes including Portreath will benefit from £40 million of additional funding which will unlock flood defence schemes and help support economic growth and regeneration in areas that have suffered flooding in recent years.

The additional funding, first announced in the budget, adds to millions of pounds of government grant-in-aid already allocated to these projects and partnership funding already secured. It will help leverage an additional £24 million from other sources, enabling the flood schemes to go ahead. In total, more than 7,000 properties will be better protected against flooding, including over 5,000 homes. This additional money is part of our £2.6 billion investment from 2015 to 2021 to fund 1,500 flood defence schemes which will better protect 300,000 homes across the country.