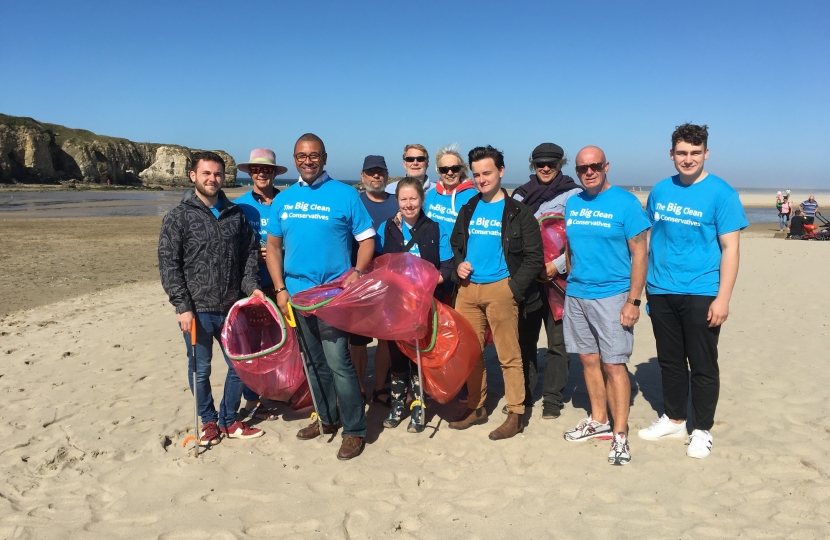 Government minister James Cleverly has today praised volunteer litter-pickers and beach-cleaners across Cornwall for their “tremendous work” to protect the environment.

Mr Cleverly, a Cabinet Office minister and chairman of the Conservative Party, took part in The Big Clean at the weekend.

There were three beach cleans in Cornwall, at Long Rock, Marazion and Perranporth.

“Conservatives are at the heart of their communities, as we’ve seen this past week with The Big Clean,” said Mr Cleverly, who joined the events at Marazion and Perranporth as part of a three-day tour of the South West.

“We know we have a responsibility to look after the environment and our local area and I’m delighted that so many were out doing just that this past weekend.

“I applaud the many people and community groups involved in beach cleans and litter-picks across the South West for their tremendous work to tackle the scourge of litter and protect our precious environment.”

Peter Booth, chairman of South West Conservatives, said: “Conservatives care deeply about the environment and it was great to see so many taking part in The Big Clean, including government ministers James Cleverly, Robert Buckland, Geoffrey Cox, Kevin Foster and John Glen.

“Litter continues to be a problem in too many places, damaging our coastline, countryside and streets, and we’re determined to confront the issue head-on.

“The Big Clean was a big success and I would like to thank everyone who took part, especially members of the public who joined in, as well as all those involved in other campaigns and projects to reduce or eliminate litter.”

Some of the events tied in with other campaigns, including the Great British Beach Clean led by the Marine Conservation Society.

Environment Secretary Theresa Villiers described The Big Clean as “an excellent campaign” and thanked all organisers and volunteers “for their efforts to bring communities together, protect the environment and change the mindset of those who blight it”.