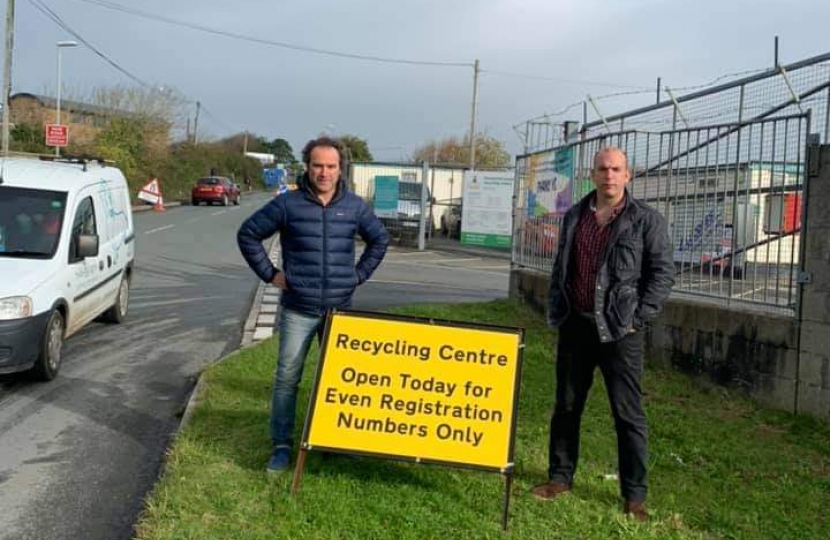 Two prominent Newquay Councillors have written to Councillor Rob Nolan the Cornwall Council portfolio holder for Environment and Public Protection to question the current operating model of the Household Waste and Recycling Centre (HWRC) on Trevenson Road, Newquay. The HWRC serves all of Newquay and the surrounding area and since the current Lib Dem / Independent administration took the decision to remove the recycling banks from every town in Cornwall, the recycling centre is now the only recycling point for towns as far afield as Padstow and Perranporth.

Councillor Olly Monk, Cornwall Councillor for Newquay Treloggan and Councillor Louis Gardner, Mayor of Newquay have written asking for the current system of alternating odd and even numbered number plates on alternate days to be scrapped. Both say that whilst the system was appropriate when the HWRC first opened after lockdown, it is no longer fit for purpose as daily demand has dropped and the people of Newquay can only use the centre 3 or 4 days a week and are being inconvenienced for no reason at all.

The letter to Councillor Nolan reads:

There are some temporary rd. works at/near to the entrance of the Newquay site and I would suggest going back to the usual system of entering the site once these works have finished.

Could you please confirm that this is something that we can act on and implement.

This is the third occasion now that we have written to Councillor Nolan and Cornwall Council to address the changing situation at Newquay Household Waste Recycling Centre. The administration has been consistently slow to respond to the situation on the ground. Cornwall was one of the last areas in the country to reopen recycling centres and Newquay was one of the last in Cornwall to reopen. They removed the traffic marshals, who initially helped to control the traffic, before it was safe or appropriate to do so and now they seem to have completely forgotten that there is still a temporary system in place. Newquay seems to be consistently forgotten about and left at the bottom of the pile. The HWRC is even more important since the disastrous decision by the administration to remove every recycling bank in the county but what we have now is a situation where the residents of Newquay and the surrounding area, despite paying full Council Tax can only use the centre for half the week.

Once again, the issue of the recycling centres has had to be addressed. It’s not rocket science! All we need is a dose of common sense. If the Lib Dem Administration can’t even get this right what chance is there for when the new waste contract comes into force next year. Seeing as the whole idea is to get Newquay recycling more the decisions being made at County Hall seem to create the opposite.