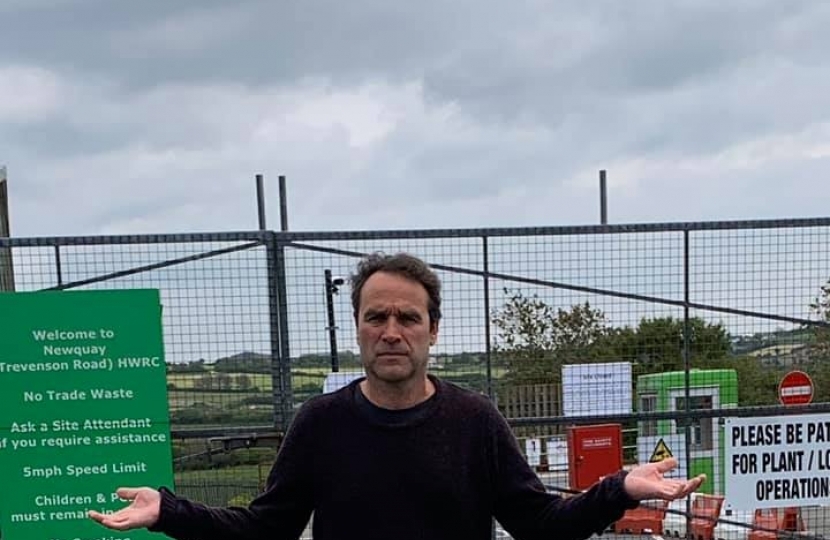 It comes as the ruling Liberal Democrat Independent Cabinet is asked to recommend proposals by officers to limit trips to Household Waste and Recycling Centres in Cornwall to 26 per year to most cars, with some limited to just twelve.

But the Newquay Councillor has condemned the plans, including raising concerns that the proposals as set out discriminate against lower income families who may have access to only one vehicle.

“It appears that Cornwall Council’s Lib Dem/Independent Cabinet is again in danger of tinkering with the waste and recycling arrangements in Cornwall to the determent of the Cornish taxpayer.”

“With the already unpopular and widely condemned removal of community recycling bins across our county as well as the changing of general waste collections to fortnightly, the proposals in the Waste Inquiry up for recommendation at to limit vehicular access to 26 visits per year Household Waste and Recycling Centres are just wrong.”

“Firstly with the reduction in services mentioned we have already been told that many people will be left with no option but to visit the tip more often in order to regularly dispose of their waste.”

“There is also much concern that restricting access in this way will lead to yet more fly-tipping.”

“Finally these proposals seem to discriminate against lower income households that may often only have one car per family. It is simply not fair to allow wealthier people with more means at their disposal to access these public facilities that we all pay for, more often than people who only have one car. “

“These proposals in particular are unacceptable and in my view, another kick in the teeth for the working family in Cornwall from this Administration.”