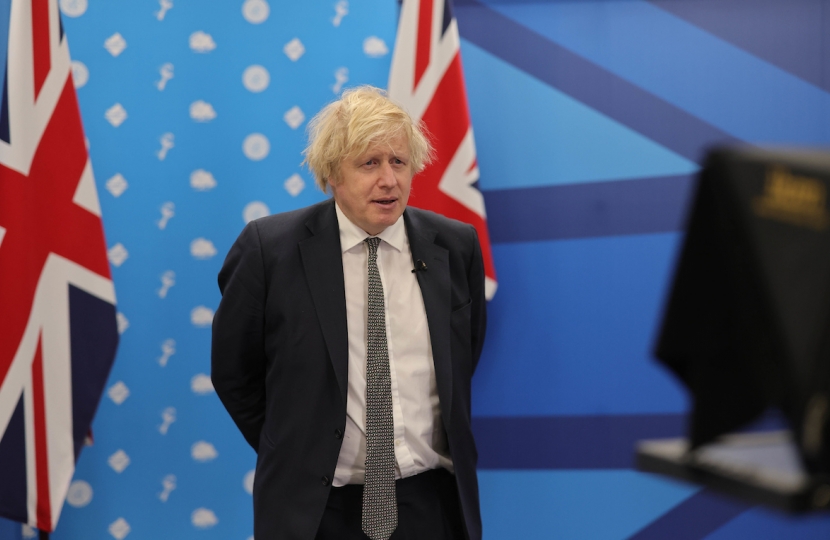 And the Group was joined by Prime Minister Boris Johnson, who was delighted to endorse their plan for Cornwall.

“We have an outstanding team of hardworking Conservative councillors across Cornwall, led by Linda Taylor and her team, who - day in and day out - represent the people’s priorities in their communities and relentlessly champion Cornwall.

I wanted to put the call out to you today because we need more Conservatives elected in Cornwall!

We are the largest group on the council, but as you know, the council is run by coalition of Lib Dems and others.

To state the obvious – we want Conservative Councils everywhere -

But we obviously want a Conservative Council by the time of the G7 in Carbis Bay in June!

Cornwall Conservatives will spend your money wisely and support the priorities of people here,

And they have a plan for new homes which will focus on local need and affordability, whist ensuring that Cornwall retains its unique and stunning beauty.

Cornwall Conservatives have a plan to support businesses and encourage new enterprises, linked to the support they will provide for the green economy and the huge opportunities of Spaceport Cornwall and the wider UK space sector.

And of course, the Cornish Conservatives will put our environment at the heart of all their decisions.

I can’t wait to be back in your part of the world soon,

And let me say this loud and clear - back your local Conservatives on May 6th and let’s build back better in Cornwall!”

“I am proud to be presenting our Conservative Plan for Cornwall, but it’s not our plan, it’s your plan, a plan for every resident and business in this amazing place we call home.”

“We will never forget that the money the Council spends, is your money!

"For the last eight years, the Lib Dems and Independents who run the council have not wasted an opportunity to waste your money on their madcap schemes and vanity projects.”

“Despite Brexit, the Lib Dems and their friends who run County Hall seem to be hellbent on having more positive relations with countries in the EU than their own government and their agenda over the past four years has put them squarely at odds with the people of Cornwall.”

“Our plan delivers for Cornwall, cutting waste at County Hall, investing in new and sustainable businesses, keeps communities and the environment at the heart of every decision, and ensures that no one gets left behind.”

“Make no mistake about it, Cornwall Council needs change – vote Conservative on 6 May and we will be that change, for you.”

Conservatives in opposition have focused on the day job and if they win power in May, have promised to get back to basics and make the Council deliver the important local services that residents want to see.

Our incredible local Conservative candidates, with a huge range of experiences have been selected to stand up for their local community and seek election in May. From Armed Forces veterans to NHS key workers, both young and experienced Conservatives are fired up and ready to deliver positive change for their local areas across Cornwall.

Conservatives have today launched their 6 point plan for Cornwall: