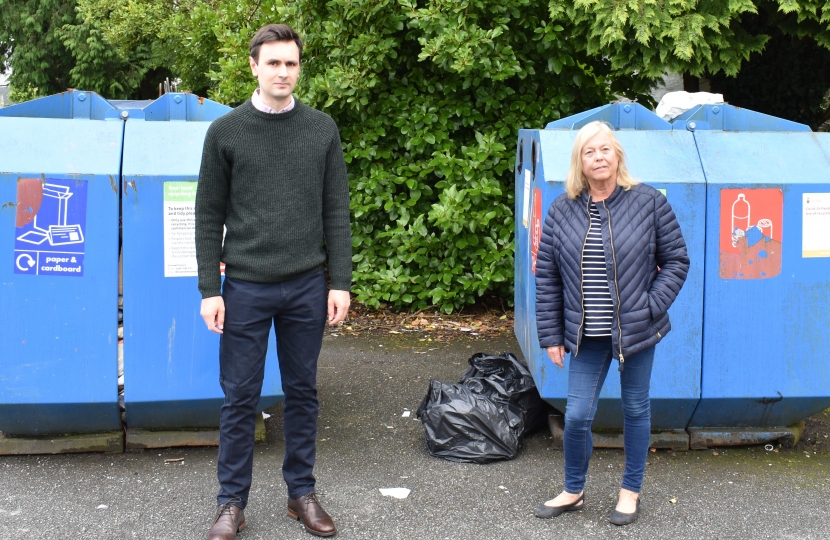 Liskeard’s Conservative Councillors Nick Craker and Jane Pascoe have called out plans to remove all public recycling banks in Liskeard’s car parks, as a backwards step for the environment earlier this year.

Despite calls to save the recycling banks, the ruling Lib Dem – Independent coalition who run Cornwall Council have now ploughed ahead and removed the recycling banks in Liskeard, making it more difficult for families to recycle.

Despite this backwards step, Councillors Nick Craker and Jane Pascoe are continuing with their campaign, on their resident’s behalf, to help make recycling easier.

“This was the wrong decision for Liskeard, we all want to be recycling more and look after our environment but the ruling Cabinet of Cornwall Council do not seem interested in helping residents recycle. We have been ignored yet again.”

“I have already been contacted by a number of residents who are both shocked and angry that Cornwall Council would remove these recycling banks, making it more difficult for everyone to do the right thing and recycle.”

Before their removal, Councillors Nick Craker and Jane Pascoe were regularly having to ring up the Council to get them to empty these bins more regularly because they are overflowing – showing just how well used they were by residents. Many people live in flats or do not have space to store four recycling containers and therefore rely on these carpark recycling facilities.

“I am really concerned what this decision will mean for recycling rates in Liskeard that are already some of the lowest in Cornwall.”

Cllr Nick Craker added “the carpark recycling banks might be gone for now, but our campaign continues. We need a Council ready to listen to residents, The Lib Dem and so called ‘Independent’ Councillors who make up the ruling Cabinet have got this one wrong, I hope they will U-turn on this backwards step.”