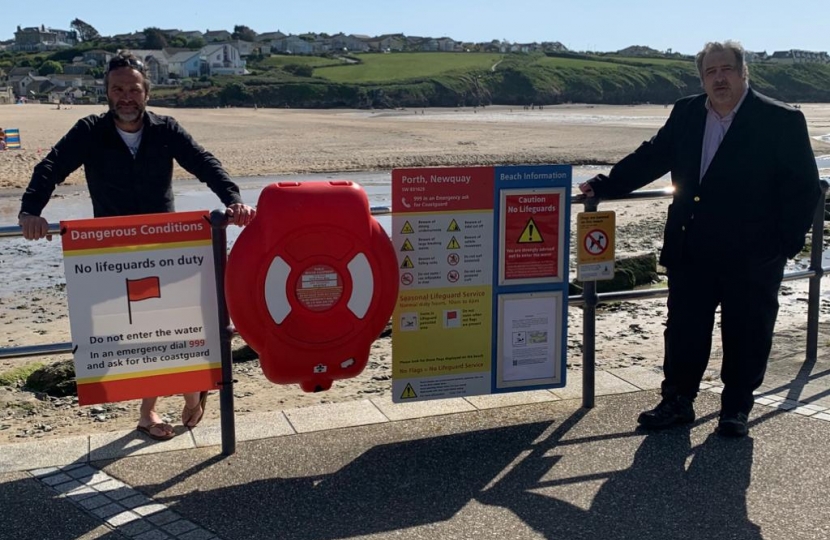 News that most Cornwall beaches will have lifeguard cover this weekend and that all beaches in the county should soon be covered was welcomed today by Conservative councillors on Cornwall Council.

The Conservative group on the council has been working hard behind the scenes to find a way to resolve issues which this year have led to a complete absence of the lifeguards whom the council contracts with the Royal National Lifeboat Institution (RNLI) to provide.

Two fatalities, one person suffering life-changing injuries, and four others rescued in a string of emergencies around the Cornish coast over the Bank Holiday weekend have focussed the minds of the authorities during this week.

Cllr Peter Williams (Mabe, Perranarworthal and St Gluvias), who has a lifelong connection with and has held key roles in surf life saving clubs, said:

“I have now had it confirmed to me that the RNLI are working at pace to provide cover on all beaches.”

“l understand this is an insurance issue with Covid-19 so health and safety issues with the lifeguards had to be addressed to make sure there were no insurance loopholes.”

“However, I have been assured that all concerned are moving as quickly as they can and that by Saturday most beaches will have RNLI lifeguard cover.”

“I know that Surf Life Saving Association clubs will also be patrolling as voluntary wardens, so hopefully almost all beaches will have some kind of cover.”

“I am delighted that the RNLI is finally getting its act together to provide the professional life saving personnel we need on our beaches as they become increasingly busy with the easing of the lockdown.”

“It will be of little comfort to the families of those who died or were injured last weekend when lifeguards were scandalously absent from our beaches but hopefully this will help to prevent further tragedies occurring this summer.”

Cllr Olly Monk (Newquay Treloggan), who has been involved in surf lifesaving for 10 years and is chairman of Lusty Surf Lifesaving Club said the Conservative group of councillors was now also pressing the council to extend its RNLI lifeguarding contract to the end of September.

“At the moment the contract is due to end on September 4 but we think it should be extended to allow for the holiday season to be stretched beyond the traditional return to school time.”

“We are anticipating there will be many people wanting to take post-lockdown holidays here in Cornwall as we begin to get back to normality and therefore to accommodate them they will need the season to continue past the beginning of September.”