“Shocking and Unacceptable!” Prominent Newquay Town Councillor calls for immediate measures to protect the safety of children at Newquay playpark 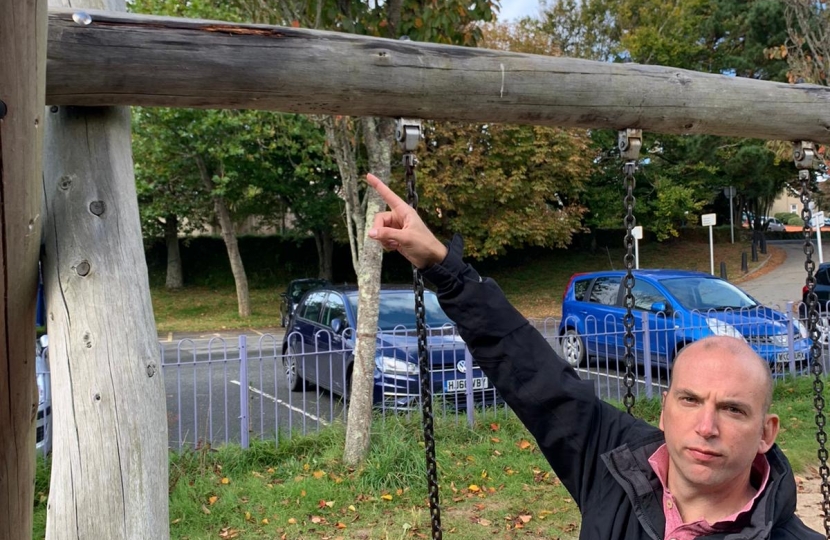 A prominent Newquay Town Councillor has called for urgent repairs to a Newquay playpark amid further claims of poor value for money from a Cormac project.

Councillor Louis Gardner, the current Mayor of Newquay, has written to Cornwall Councillor Geoff Brown, whose division the Trenance playpark is in, to ask him to urgently address serious safety concerns.

Councillor Gardner claims that the playpark, managed by Cormac, like all Cornwall Council playparks are, was built at an over-inflated price and since being built 3 years ago as a partnership between Cornwall Council, Cormac and a prime contractor, has not undergone routine maintenance and inspection, leaving the playpark in a hazardous and dangerous state.

I am writing to you to bring to your attention the appalling state of the Trenance playpark which is in your division. I recently visited the playpark with my daughter and we were dismayed to see the poor state of repair of the items of equipment. Many of the wooden supports are extremely rotten and large chunks have started to drop off them, leaving splinters and cracks that are extremely dangerous. The zipwire is completely missing and the large basket swing has been removed. The playground surfaces are destroyed in many areas, leaving large sections of mud and pools of water.

This playpark was built only 3 years ago, with a huge grant of over £130,000 of Section 106 money. Like all playparks that are built, the equipment and work should have come with a guarantee and I believe in this case, the equipment is guaranteed for 15 years. However, most guarantees such as this require at least a minimum amount of ongoing maintenance and preservation work to be undertaken. The playpark has clearly not been maintained or preserved in any way during its life so far and is clearly not being regularly inspected, if it was then this damage would have been identified.

This week I have had the playpark inspected by a respected Health & Safety consultant who has informed me the equipment is unsafe, and in his opinion should be closed until remedial work takes place. This is the second such instance in Newquay (the first being the St Columb Minor recreation ground) where Cormac have built a sub-standard facility for a far-inflated sum of money and a proper maintenance and inspection plan has not been put in place. I find it shocking and unacceptable that Cornwall Council have such a cavalier attitude towards not only the maintenance of assets within our town but also towards the safety of our children.

I have enclosed photographs of the current situation. This winter is bound to make the condition of the equipment even worse. I request that remedial works take place immediately to ensure the safety of children using this playpark and also to preserve the lifespan of this facility into the future.

“This is the second example of a playpark in Newquay being built to a sub-standard specification. Cornwall Council’s own policy to only allow Cormac, a subsidiary company of the council, to oversee or design and build playparks on their land is ludicrous. This policy results in no competition for the work and allows Cormac to charge the taxpayer practically whatever they want and take a slice of the budget, in this case over £130,000 of Section 106 money.”

“In addition, yet again, the project has been funded from a pot of grant money without any thought whatsoever to the financing of ongoing preservation, maintenance and repair. In this case, I expect that this lack of ongoing repair will have led to a voiding of whatever guarantee was provided by the manufacturer.”

“The playpark is now physically crumbling and splintering, in my opinion leaving the equipment dangerous. I certainly won’t be letting my own 5 year old daughter play on that equipment. I have urgently requested that Councillor Brown commission repairs and improvements to this site, this could very easily be funded from money from the Community Infrastructure Levy, which is specifically earmarked for projects such as this.”