North Cornwall
Born in Wadebridge, Scott Mann went to school and has worked and lived in North Cornwall all his life Working as a postman, Scott entered politics through joining the Wadebridge Conservative Club.

Shortly afterwards, he was elected as the councillor for Wadebridge West on North Cornwall District Council (NCDC). Scott retained his seat at the next local elections and continued to represent Wadebridge West when NCDC was replaced by the Cornwall Council unitary authority.

Scott was first elected as the Member of Parliament for North Cornwall in May 2015.

Scott is passionate about representing the interests of everyone in North Cornwall, from Kilkhampton down the coast to Padstow, and from Launceston across the moor to Bodmin.

People in Cornwall deserve a strong, united team to get the right deal for them in housing, transport, tourism, social care and post Brexit funding, the Local Government Secretary said today. 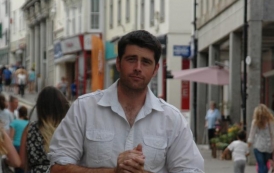