Before becoming Member of Parliament for St Austell and Newquay Steve had a broad experience of working in Cornwall across a variety of sectors. This included working for a bank, local church and charity, starting and running his own business in St Austell and being a local councillor at both Town and Council level and a member of the Cabinet at Cornwall Council.

Since Steve’s election in 2015 he has been an effective voice for Mid-Cornwall in Parliament but also willing to stand up and challenge the Government when needed. In fact, in April 2017, the Cornish Guardian stated in their own editorial article that Steve Double has proved himself to be ‘a proud Cornishman first and an elected Conservative second.’

Steve has worked hard to secure Government money towards a £100m investment fund for Cornish businesses.

Steve has worked to make Newquay the frontrunner to be the location of the UK Spaceport, with the bid now submitted awaiting an outcome.

Steve has secured Government backing for the new A30 link road to St Austell, something which people have wanted and talked about for years, but which has only got moving since Steve was elected as the MP for the area.

Steve has worked with the Government to increase NHS funding across Cornwall including a mental health in-patient facility for young people, £1m funding for Treliske’s A&E and £24m for social care which will relieve pressure from delayed discharges from Treliske Hospital.

Working with his team, Steve has assisted nearly 3,000 people since his election with casework across a wide range of issues. Securing tens of thousands of pounds of delayed benefit payments for constituents.

He has replied to more than 10,000 people on policy matters.

He has spoken in 114 debates in Parliament since his election, well above average amongst MPs.

Steve has attended over 300 local events, including visiting nearly every school across Mid-Cornwall and has a popular programme for schools to visit him in Parliament.

In Parliament Steve chairs the All Party Parliamentary Group for Protect Our Waves, working with Cornish charity Surfers Against Sewage, leading the fight against marine litter and protecting our beaches and seas which are so important to Mid-Cornwall.

He is also co-chair of the Regional Airports APPG which works to lobby government on behalf of small regional airports. In this role, he has been able to effectively support Cornwall Newquay Airport which was recently named the best regional airport in the country by one national newspaper.

Steve sits on the European Scrutiny Committee, which is expected to play an important role in our Brexit negotiations.

Steve also sits on the Petitions Committee, and has led several debates on subjects ranging from school term time holiday rules to the cost of car insurance for young people.

Steve is also vice-chair of the Parliamentary Beer Group which works to support pubs and breweries. In this role, he has been able to actively support the work of St Austell Brewery – an important local business and employer.

Steve is also a member of the influential Ceramics All Party Parliamentary Group which represents the ceramics industry which includes China Clay. In this role he has been able to influence government policy on issues effecting this important local industry to reduce the tax burden and promote china clay exports post Brexit.

Steve also sits on the important Parliamentary Space Committee where he has been able to promote Newquay as the frontrunner to be the location of the UK’s first spaceport. This would be a huge boost to our local economy and would create up to 1000 well paid jobs. Steve is well known in Parliament for his active support for Newquay Airport and has met with Government Ministers dozens of times in order to secure their support.

Steve is the vice-chair of the Parliamentary Group for Fatherhood and has spoken up for the important role dads play in the family and worked for more government support for Fathers.

Steve Double, Member of Parliament for St Austell and Newquay, has today, in his capacity of Chairman for the Protect Our Waves All Party Parliamentary Group (APPG), urged the Environment Agency to use tighter legal limits on combined sewage overflows.

Steve Double, Member of Parliament for St Austell and Newquay, has welcomed the content of today’s Queen’s Speech. 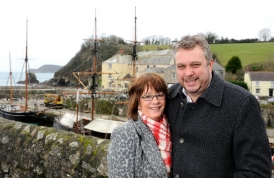