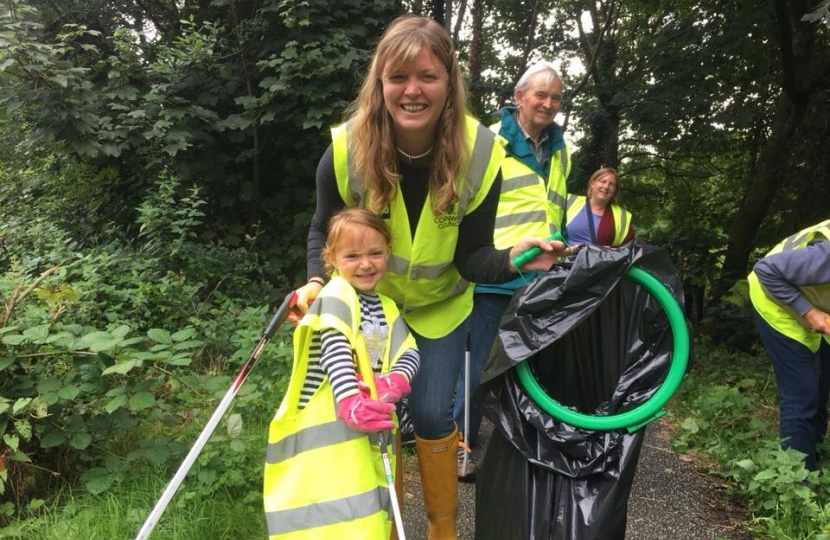 Cherilyn was born and raised in the coastal town of Scarborough, North Yorkshire and moved to Falmouth 2011. She is now a Cornwall Councillor and before this, she worked as an IT project manager in London, Bristol and overseas.

Cherilyn is married to Nick, who is Cornish born and has fished and surfed the Cornish coasts for over forty years.  Nick also grew up with the Kneehigh Theatre and has been involved in the music scene of Cornwall since the 1980s.  They have a young daughter and currently live near the Roseland peninsula.

Cherilyn is passionate about the environment around us.

“There is so much we can do on the ground here in Truro & Falmouth, such as regularly clearing plastic from our beaches, waterways and countryside, ensuring planning applications are sustainable and providing energy efficiency, improving air quality in hot spots, such as Highertown and expanding and improving our cycle paths.”

“As an MP, I will also have the opportunity to work with Government in order to put pressure on plastic manufacturers, improve policies regarding our marine management and help deliver carbon neutrality by 2050.”

Cherilyn voted Leave in the Referendum on our membership of the EU in 2016. Another reason she wants to become MP for Truro and Falmouth is to help unblock the Brexit situation so we can then move on to the other important domestic and international issues that we face.

“I want to unblock our paralysed parliament and deliver on the result of the 2016 referendum; leave the EU as soon as possible.  This was a simple ‘in’ or ‘out’ question.  There was no talk of ‘hard’ or ‘soft’ Brexit.  The Government at the time warned us that we could potentially be leaving on WTO terms and that it was a ‘once in a generation’ vote.  We still voted to leave.  For me, the decision is a simple one; to leave the political union, strike a free trade deal and move on to a positive and exciting future.”

“I look forward to representing all the people of the Truro & Falmouth constituency.”